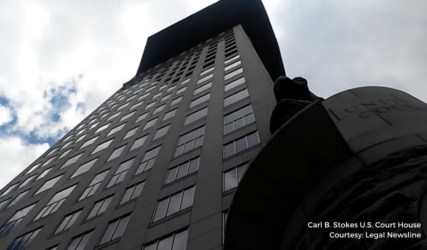 As we enter a new year, we take a look back on some of the most important legal headlines of 2019 — and some you may have missed!

Perhaps the most significant legal battle in Ohio (and arguably across the country), was the federal lawsuits against drug makers and various other defendants over legal liability for the nationwide opioid crisis. In August, a federal judge in Oklahoma found defendant Johnson & Johnson contributed to the public health crisis through misleading and improper marketing of opioids. Johnson & Johnson was responsible for paying $572 million to the state of Oklahoma. In a similar lawsuit in Ohio, some key defendants reached a settlement on the eve of their October trial date. The pharma companies who settled agreed to pay $260 million to Summit and Cuyahoga counties. Though some defendants in the Ohio opioid lawsuit have settled, other aspects of the case continue into 2020, in what some are calling the most significant lawsuit since those waged against the tobacco industry in the 1990’s.

On January 31, 2019, Justice Melody Stewart was ceremonially sworn in as the newest Justice on the Ohio Supreme Court. Justice Stewart’s election was historic — she became the first African-American woman elected to the highest court in Ohio, and is also the first African-American Democrat elected to any statewide office in Ohio. Before joining the Ohio Supreme Court, Justice Stewart served on the Eighth District Court of Appeals in Cuyahoga County.

In 2019, Cuyahoga County passed a countywide ban prohibiting grocery stores and other retailers from using single-use plastic bags. Although the law “officially” took effect on January 1, 2020, the County has decided to delay enforcement of the law until July 1, 2020. The history surrounding the ban has been tortuous. In December 2019, the Ohio House passed a bill to “ban the ban” — an attempt to prevent local governments from banning single-use plastic bags. That same month, the City of Cleveland, North Olmsted, Strongsville, Independence and Brooklyn all opted out of the ban. Many businesses have also expressed concern that a patchwork ban will cause confusion as to which stores are permitted to use plastic bags.

As we previously reported, in a 6-3 decision in June, the Supreme Court of the United States invalidated a portion of federal trademark law which prohibited registration of “immoral or scandalous” marks. That prohibition, according to the court, was an unconstitutional violation of the First Amendment, and opened the door for new applications of potentially offensive trademarks, including those previously denied under the “immoral or scandalous” rule.

5. NCAA to Allow Athletes to Get Paid for Using Their Likeness

In October, the NCAA announced that it would change its decades-old rules and begin allowing student-athletes to benefit from the use of their name, image and likeness. The timeline for implementing the change, however, is still unclear. The change followed a recent California law designed to achieve the same goal. For decades, the NCAA restrictions have been criticized as excluding college athletes from a multibillion-dollar industry.

6. Taylor Swift Without Recourse for Her Master Recordings

In July, outrage was sparked as America’s sweetheart, Taylor Swift, waged an internet war against her former record company, Big Machine Label Group. Though Swift departed, her former label continued to own the master recordings for her first six multi-platinum albums. And it’s a common practice. In 1985, Michael Jackson reportedly paid $47.5 million to acquire The Beatles catalog. After some changing of hands, Paul McCartney finally re-acquired the masters in 2017. Prince regained control over his master recordings after an 18-year battle with Warner Brothers after calling himself a “slave” to the label. Though this practice will undoubtedly continue, thank you Taylor Swift for setting the internet ablaze with a little bit of contract law.

In July, Ohio legalized the possession, purchase or sale of hemp extract CBD and hemp products. A hemp product is any product made with hemp containing .3% or less THC. These products include cosmetics, personal care products, dietary supplements and even particleboard. Of course, the new law has created some gray areas to be sorted out but, in the meantime, Ohioans can expect to see CBD products all over shelves.

In September, the US Department of Labor announced its final new rule for overtime exemptions under the Fair Labor Standards Act. Among other things, the new rule raises the salary threshold for certain professional exemptions, and raises the “highly compensated employee” exemption. The rule took effect January 1, 2020 and will potentially affect more than a million employees.

In September, Ohio significantly updated its rules for Ohio Notaries Public, and those seeking to become Ohio Notaries. Perhaps the most significant change to the notary law was the creation of “Online Notaries,” which allows documents to be notarized over the internet using an electronic notarization system. The law has been praised as appropriately updating Ohio’s Notary law for the 21st Century.

If you have any questions or would like to discuss further, please reach out to Kyle Hutnick at 216.736.7243 or kah@kjk.com, or reach out to any of KJK’s Litigation professionals.