Federal Trademark Law Is About to Get F-U-C-T

By: Kyle Hutnick and David Posteraro

The US Supreme Court on Monday struck down a provision of the federal trademark statute that prohibited the registration of “immoral” or “scandalous” trademarks for violating the First Amendment. The case is Iancu v. Brunetti and the plaintiff wasted no time in issuing a press release.

In February, we alerted readers to a challenge to Section 2(a) of the Trademark Act. As we reported, clothing designer Erik Brunetti applied to register the trademark FUCT in connection with the Fuct brand of clothing. FUCT is (supposedly) pronounced as four letters, one after the other: F-U-C-T. Reviewing his application, the PTO examining attorney and PTO’s Trademark Trial and Appeal board both determined that the FUCT mark was “a total vulgar[ity]” and therefore unregistrable. Although Brunetti was free to create and sell FUCT products, the lack of trademark protections left him without the power afforded a federally registered trademark to pursue potential infringers.

During the application process for the FUCT mark, the PTO examining attorney and, subsequently, the Trademark Trail and Appeal Board relied upon a section 15 U.S.C. § 1052(a) of the Trademark Act which prohibited registration of marks that are immoral or scandalous.. The mark, they decided, was “highly offensive” and “vulgar” and used in combination with extreme nihilism, antisocial behavior, misogyny, depravity, and violence, which was unquestionably “extremely offensive.” Ouch. Brunetti challenged the law in federal court, arguing that the prohibition on immoral or scandalous material on its face violated the First Amendment to the U.S. Constitution. The Court of Appeals for the Federal Circuit sided with Brunetti and invalidated that provision of the Act.

If there is one way to grab the Supreme Court’s attention, it’s by invaliding a federal statute.

Brunetti appealed to the US Supreme Court, which agreed to review the case. The Supreme Court agreed with the lower court and invalidated the “immoral or scandalous” exception. In doing so, the Court relied on its earlier decision in Matal v. Tam, where the Court declared that a similar prohibition — against registering disparaging marks — also ran afoul of the First Amendment. Under the Court’s First Amendment precedent, the government can only discriminate against speech when it is viewpoint-neutral. When the government disapproves of those messages it finds offensive, that is viewpoint-based discrimination and violates the First Amendment. 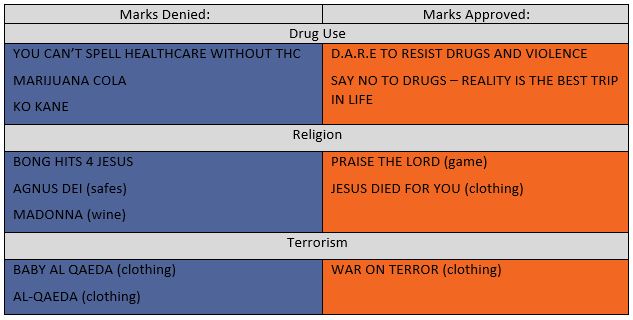 Based on the above, the Court determined that the government rejected trademark registrations that were “offensive to many Americans.” “But,” as the opinion noted, “the Court [had] made clear in Tam, [that] a law disfavoring ‘ideas that offend’ discriminates based on viewpoint, in violation of the First  Amendment.”

The Court’s findings closely followed those submitted in a brief authored by New York University law professors Jeanne Fromer and Barton Beebe. The professors argued that the USPTO’s trademark approval process is inconsistent and often arbitrary. In the Court’s eyes, this pattern of disfavoring “ideas that offend” constitutes governmental sanctioned viewpoint discrimination in violation of the First Amendment.

Justice Alito, concurring with the majority opinion, noted that the decision was “not based on moral relativism but on the recognition that a law banning speech deemed by government officials to be ‘immoral’ or ‘scandalous’ can easily be exploited for illegitimate ends” and he signaled Congress that the decision did not prevent it from adopting a more carefully focused statute that precludes the registration of marks containing vulgar terms that play no real part in the expression of ideas.

Chief Justice Roberts, concurring in part, would distinguish between matter that was “scandalous” on the one hand and “immoral” on the other. The immoral portion of the law, he wrote, is not susceptible of a narrowing construction that would eliminate its viewpoint bias. However, the “scandalous” portion of the provision could, he concluded, be constitutionally supported.

In separate opinions, Justices Breyer and Sotomayor warned that the Court’s decision would   “beget unfortunate results.” With the scandalous-marks provision struck down as unconstitutional viewpoint discrimination, the Trademark Office will, the Justices noted, have no statutory basis to refuse (and thus no choice but to begin) registering marks containing “the most vulgar, profane, or obscene words and images imaginable” and a “coming rush” to register such trademarks.

The Court declared, in no uncertain terms, that the ban on immoral and scandalous trademarks is unconstitutional and violates fundamental principles of free speech. The decision in Brunetti opens the door for new applications of potentially offensive trademarks, as well as those applications that were denied under the now invalid statute. But can we expect to see a rush to the USPTO to register every profanity imaginable? Probably not, says Professor Beebe. He doesn’t believe there is a significant demand to protect offensive marks.

Only time can tell whether there will be a rush to the USPTO to register scandalous marks. Regardless, we will be on the lookout for some jaw-dropping t-shirts in the future. 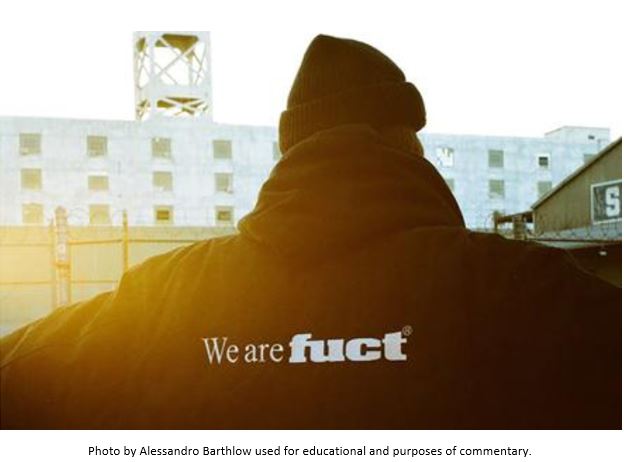