Is Ban on “Immoral” or “Scandalous” Trademark Registrations Constitutional? Supreme Court to Decide 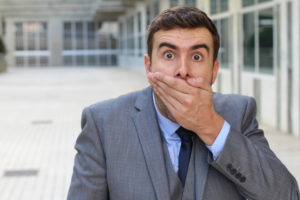 Sex sells. From lux designers to street wear, wines and cosmetic, brands flirt with the scandalous. At times this flirtation is explicit in the brand name itself. However, in the United States, trademark protection of “scandalous” marks has been proscribed for more than 100 years. This prohibition is enshrined in Section 2(a) of the Trademark Act which forbids registration of any mark that ‘[c]onsists of or comprises immoral  . . .  or scandalous matter; or matter which may disparage . . . persons.”

Although the words “immoral” and “scandalous” have different connotations, almost all cases that have considered the issue look to whether the matter in question is scandalous. Over the years, a variety of marks have been refused registration because they contained “scandalous” material. So, for example, a mark consisting of a bottle in the shape of a hand with middle finger extended upwards was refused registration, as have been the trademarks DICK HEADS, AW SHIT and JACK OFF.

All this may change. Last month, the Supreme Court accepted a case involving the best known Anglo-Saxon vulgarity and the constitutionality of Section 2(a)’s prohibition against federal registration of trademarks that contain “scandalous” or “immoral” subject matter.

In August of 2017, Erik Brunetti applied to register the trademark FUCT for a variety of clothing items including belts, pants, shirts, etc. The application was based on his continuous use of the mark since 1991. In support of the application, Mr. Brunetti presented the following specimens:

The examining attorney refused registration based on Section 2(a)’s prohibition against registration of immoral or scandalous marks. The Trademark Trial and Appeal Board affirmed rejection of the application on the ground that the mark was the phonetic equivalent of “fucked” and therefore ran afoul of Section 2(a).

In its recitation of the facts, the TTAB opinion goes to great length to chide not only the vulgarity of the mark in question but the entire nature of the applicant’s goods:

We conclude from a review of the entire record that Applicant’s clothing and website also mirror the offensive nature of the word . . . as well. In response to the pessimistic, rhetorical question of “just how ‘fuct’ are we?,” the imagery Applicant employs throughout this record is one of extreme nihilism – displaying an unending succession of anti-social imagery of executions, despair, violent and bloody scenes including dismemberment, hellacious or apocalyptic events, and dozens of examples of other imagery lacking in taste, usually in close proximity to Applicant’s use of his proposed mark.

On appeal, however, the Federal Circuit sided with Mr. Brunetti. Following the Supreme Court’s 2017 decision in Matal v. Tam, 137 S. Ct. 1744, the Circuit court held that the Trademark Act’s prohibition against “scandalous” matter is contrary to the Free Speech provision of the First Amendment.

Matal v. Tam centered on an Asian-American brand called, “The Slants” whose application to register the trademark had been refused under Section 2(a)’s prohibition against registration of disparaging marks. Addressing the constitutionality of this prohibition, the Supreme Court in Tam unanimously found the prohibition on registration of such disparaging marks to be contrary to free speech rights because it amounted to viewpoint-based discrimination. However, the Tam decision expressly limited its holding to disparaging marks, leaving open the question of whether the ban on immoral or scandalous matter was constitutionally valid.

Because the Circuit court’s decision in the Brunetti case followed the Tam decision in regards to scandalous marks, the government petitioned the Supreme Court to review the case, and the Court has now granted certiorari with the direct question:

Whether [Section 2(a)’s] prohibition on the federal registration of “immoral” or “scandalous” marks is facially invalid under the Free Speech Clause of the First Amendment.

In its petition for review, the USPTO reiterated the argument that Tam was not controlling because the disparagement prohibition turned on viewpoint discrimination rather than legitimate content-based restriction. It maintained that the bar on registering immoral or scandalous marks did not restrict speech because trademark rights are created by use in commerce, not by federal law. Mr. Brunetti, they argued, had used his FUCT mark since 1990 and could legally continue to do so, but without the benefits conferred by federal registration, such as the presumption of validity and the ability to recover certain statutory damages against potential infringers.

The government also argued the federal trademark registration regime was a “limited public forum” that subjected content-based restrictions to a lesser degree of scrutiny, and that the ban on registering immoral or scandalous marks constitutes a reasonable exercise of the federal government’s spending power—arguments that it had unsuccessfully made before the Federal Circuit. Seeking to claim the higher ground of the #MeToo moment, the USPTO further argued that Brunetti used his FUCT mark in the context of “strong, and often explicit, sexual imagery that objectifies women and offers degrading examples of extreme misogyny” – an argument which would seem to run counter to its earlier assertion that the USPTO was not exercising viewpoint discrimination.

Our own experience of Section 2(a) refusals is that like beauty, what constitutes scandalous material is often in the eye of the individual examining attorney beholder. LICK. DRINK. SUCK. for example registered without objection, as have numerous WTF marks. The Court may well find that what constitutes immoral or scandalous content is never viewpoint-neutral. If Brunetti prevails, be prepared to see a rush to register every conceivable vulgarity.