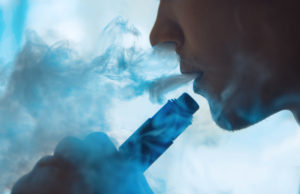 Vaping is a hot topic that has caused major public health concerns in recent months. As of November 20, 2019, at least 2,290 confirmed vaping-related lung injuries, including 47 deaths, have been reported to the Centers for Disease Control and Prevention.

There are several reasons why teens are increasingly vaping and using e-cigarettes. Many of them believe vaping is less harmful than smoking. On a per-use cost, e-cigarettes are less expensive than traditional cigarettes. Finally, the variety of flavors available and the fact that vaping doesn’t give off the same repugnant smell that smoking does make e-cigarettes more appealing to young people. That being said, even though vaping may be less harmful in some ways than traditional cigarettes (i.e. there are fewer contaminants in e-cigarette aerosol than in tobacco smoke), that doesn’t mean it’s “safe.” Vaping leads many teens to become addicted to nicotine. Once addicted, teens often eventually turn to traditional tobacco products. Besides nicotine, the vapor in e-cigarettes contains potentially dangerous substances like heavy metals, cancer-causing chemicals and diacetyl, which has been linked to a serious lung disease.

Lawmakers in the state of Ohio are aware of these problems associated with vaping and are taking action. In early October, concerned that vaping and e-cigarette flavors entice adolescent teens and young adults to pick up the deadly habit, Ohio Governor Mike DeWine called for lawmakers to ban all flavored e-cigarettes and vaping products, besides the tobacco flavor.

Also in October, Ohio increased its minimum age requirement to purchase tobacco products from 18 to 21, and launched the Tobacco21 initiative to raise awareness about the change. Similar to how tobacco advertising and age restrictions were implemented in the past with traditional cigarettes, the Ohio legislature has classified vaping and e-cigarette products as an “alternative nicotine product.” This classification subjects vaping and e-cigarette use to the same laws that apply to traditional tobacco products such as chewing tobacco and cigarettes. These laws not only include age restrictions, but the classification also determines how vaping and e-cigarette products will be taxed and marketed to the consumer.

While all of this may be a step in the right direction for Ohio, other states have taken a bolder approach. Michigan has banned flavored vaping and e-cigarette products entirely. Other states, such as California and New York, prohibit vaping and the use of e-cigarettes in all places where traditional cigarette use is also banned.

What the future holds in terms of vaping and e-cigarette use is uncertain. As of today, the current legal approach is similar to how states handled traditional cigarettes—that is, restrict advertising, increase the age requirement and implement a sin tax. The approach may be helpful, but many argue that it is not sufficient.