By Richard Bogomolny, Special to the CJN 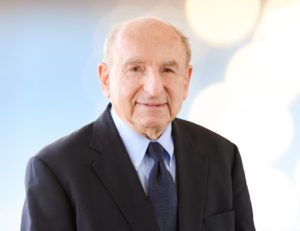 The best thing Lee Kohrman ever did for both of our careers was not to hire me. That was in 1962, but I first met Lee earlier through the Jewish Federation of Cleveland. Lee’s parents were friends with my mother, Hilda.

Lee was a graduate of both Harvard College and Harvard Law School. That kind of training, with someone of Lee’s intellect, natural curiosity, uncommon good sense, combined with a driving work ethic, created one of the best, most respected lawyers and law firms in our community at Kohrman, Jackson and Krantz.

I had returned home after my second year at Harvard when my father died, and went to work in the family’s ice cream manufacturing business. After completing my undergraduate degree at Western Reserve University, mostly at night, I went on to receive a law degree from Cleveland-Marshall Law School, attending evenings and summers.

Uncertain of my future, it was then I applied for a job at Lee’s law firm. His rejection led me back to the family business, which we grew and eventually sold to Fisher Foods. When I ended up in top management at Fisher Foods, and later at Pick-N-Pay and Finast, Lee was much too ably representing some of our major competitors in the area. But I remain thankful for the rejection that pushed me on a lifelong career path in the food business.

I admit to being biased as I have admired Lee and respected him as a friend and associate for many years. Through our associations, I noticed a consistent theme: he is always thoughtful; cares deeply about helping people; and is results oriented. He speaks softly and with care, yet he speaks with passion.

We have served together on myriad boards and organizations: the Jewish Federation of Cleveland and on the board of the Musical Arts Association/The Cleveland Orchestra, where Lee immediately became a valuable trustee. At Mt. Sinai Hospital, I served as a member of the advisory board and Lee was president of the board of directors. Lee then served as founding president of the Mt. Sinai Health Care Foundation. Its creation was his idea that he brought to fruition. On the Negev Foundation board, Lee has served on the executive committee for years.

Lee’s positive impact on the health care systems within our community has been enormous. The Mt. Sinai Healthcare Foundation was committed to the successful return of the CWRU School of Medicine to national prominence. Lee’s leadership and vision contributed to an unparalleled collaboration between The Mt. Sinai Healthcare Foundation, The Cleveland Foundation, CWRU School of Medicine and Cleveland Clinic. And just last summer CWRU and Cleveland Clinic opened the state-of-the-art Health Education Campus that is positioned for the future of the medical sciences in Cleveland.

As president of the David and Inez Myers Foundation, Lee led the foundation in establishing areas of grant making and took primary responsibility for all aspects of the foundation. He expanded the foundation’s giving to reach hundreds of organizations in Northeast Ohio with grants in excess of $50 million. The number of agencies and people benefiting locally is enhanced by the foundation’s significant support of United Way and the Federation’s Campaign for Jewish Needs.

Many of the Myers’ grants have been accompanied by Lee’s personal guidance in finding solutions to organizational and other challenges facing grant recipients. This combination of time, talent and financial support is Lee’s legacy and the mark of the success of the Myers Foundation. Two especially notable areas of impact were the creation of the Myers Campership Program, which to date has allowed more than 200 children from unaffiliated and low-income families to attend Jewish overnight camp. The second area is the Myers JDC Brookdale Institute in Jerusalem which does important work in the area of applied social policy research. The Institute focuses on at-risk populations and looks for ways to provide for changing health and human services needs as Israel grows and changes.

Lee’s love for Israel is central to his being. He has a special affection for all things Jewish, Zionist and Israel. Early on, Lee joined me on the board of The Negev Foundation. He has made multiple trips to the Negev on behalf of the foundation while in Israel on Federation, Myers Foundation or personal business. Lee was instrumental in building the Ramat Negev Desert Agricultural Research Center devoted to creating high-tech agriculture and to help people in Israel’s Negev Desert grow crops without the use of fresh water, which has always been in short supply in the desert areas of the world.

Lee has been successful because he doesn’t seek credit for himself. He is a determined fighter for those things in which he believes and is not at all bashful about presenting a dissenting opinion or taking a risk. You can disagree with Lee on many levels, but he doesn’t hold a grudge – it is never personal, and it never affects your friendship. That is a rare quality you don’t find in many people. Lee does not shy away from making tough decisions. However, he knows that in the nonprofit world, building consensus is important, and he strives to achieve that whenever possible.

As he retires from the David and Inez Myers Foundation, which he has more than ably served as president for the past 24 years, I say to my dear friend, Lee Kohrman, may you go from strength to strength.