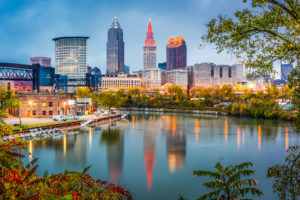 Recent headlines have ignited a renewed conversation about Cleveland’s competitiveness when it comes to being an attractive place to do business. It’s hard to forget the sting of our city not even making the shortlist of finalists last year for the bidding process of Amazon’s headquarters expansion, known as HQ2. So, what are Cleveland officials and leaders doing (or not doing) to give Cleveland more of an edge moving forward? Let’s examine some of the biggest factors affecting the city’s competitiveness.

We live in a global marketplace, and that reality is at the forefront of selecting a global HQ. For example, Nestle USA cited access to global transportation as a primary factor when it recently selected Arlington, Virginia as its new HQ in the United States. Arlington is near three major airports with quick access to direct flights to the Nestle global headquarters in Switzerland.

Another hot location for companies looking to relocate is Atlanta, Georgia, which recently welcomed new HQs for Mercedes-Benz North America, Arby’s and Norfolk Southern. The fact that it’s home to one of the busiest airports in terms of passenger traffic and flights certainly factored into those relocations.

Our competitor up north offered nearly 14,000 international flights in 2019. If Cleveland wants to compete for modern global headquarters, it needs to address the lack of access to international travel.

JobsOhio, the state’s private economic development agency, recognized this as a critical area in crafting its new strategy by adding airports and air service to its list of targeted investment industries. JobsOhio leaders acknowledged that the quality of air service is a common obstacle for companies already located in Ohio, and a reason for others to pass on the state. In response to similar issues with air service, some states have subsidized new flights. For example, British Airways announced a new London to Pittsburgh flight more than a year ago, in part due to a $3 million subsidy from the commonwealth to operate the route for its first two years. The Ohio Aviation Association has listed creation of a $15 million Air Service Development Fund to support new domestic and international air service. Until our demographics improve to increase the volume of passengers to support competitive air service, all options, including subsidies, should be explored.

In that spirit, Cleveland Hopkins announced last week that work is underway on a new master plan for the airport. Among the possibilities announced recently is the addition of a new $1 billion terminal. We are excited about the announcement (to say the least) and its potential to bring new opportunities for Cleveland.

While incentives are typically not the leading factor in any site selection decision-making process, they do play a role in assessing the overall cost of development and impact of investment, especially with regards to larger scale development. Incentives typically include property tax abatements, tax increment financing, grants, credits related to job creation, workforce development grants and grants to offset capital expenditures and infrastructure needs. But Ohio also boasts an economic development incentive that has not been widely used since the Strickland administration: the Job Retention Tax Credit (JRTC). The JRTC provides a credit against a company’s commercial activity tax (CAT) equal to a certain percentage of existing personal income tax collected from its payroll to its existing employment base. In 2011, a significant change to the JRTC program occurred with the passage of H.B. 153 of the 129th General Assembly. With this bill, the program was expanded to include a refundable tax credit component.

The largest refundable JRTC approved in Cuyahoga County (and in the state) was tied to the American Greetings HQ project in 2011. The 15 year, 75% credit was valued at $75M. Other, smaller awards of the same credit were made to Lincoln Electric in 2012 and to Progressive Insurance in the same year (although that award was on a non-refundable basis). Since then, with the exception of one project in 2013, the JRTC has not be awarded to any company in Ohio.

Given that other states looking to attract HQs provide aggressive offers based on the influx of new jobs, Ohio should consider reviving its job retention-based incentive to insure against any significant difference in incentive offering between states.

An obvious key factor in relocating a corporate headquarters is talent acquisition. Without top talent, a company will struggle to stay competitive. An emerging trend among corporate HQs is migration from sprawling suburban campuses into urban areas. Those companies feel they are better situated to attract the brightest (especially young) talent when they are based in urban areas and major cities.

Although urban HQs may be on-trend, is downtown Cleveland equipped to attract (let alone maintain) a major global headquarters? It’s no secret that Cleveland has had a difficult time attracting and keeping young talent. For example, only 25% of Cleveland’s young professionals say the reason they live here is for work. They also cite better job opportunities as the leading reason to leave in the future. With a network of high-performing schools, as well as companies who make attracting talent a top priority, we are optimistic that Cleveland can make its way to the leaderboard for attracting HQs in the future. But it requires help from everyone, including the media, to ensure that civic leadership is focused on bringing top talent to Cleveland – and keeping it here.

A successful example of this is the impact Philadelphia has experienced by doubling its college-educated population between 25-34 from 59,000 to 128,000 in just over seven years through the work of Campus Philly and its partners. Perhaps Cleveland could benefit from a similar type of organization to pivot from retaining existing companies to attracting new ones.

KJK is committed to keeping our region strong and helping companies tap into all available incentives when selecting a new headquarters. If you are interested in learning how KJK’s Economic Development team can help your company, please contact Stephanie Mercado at 216.736.7272 or smmercado@kjk.com, or Kyle Hutnick at 216.736.7243 or kah@kjk.com.