Even When You Use It, You Can Lose It: The Case of the Carpet

“Camp is a vision of the world in terms of style – but a particular kind of style. It is the love of the exaggerated, the “off”, of things-being-what-they-are not.” – Susan Sontag, Notes on ‘Camp’

In the United States, brand owners acquire common law trademark rights simply by being the first to use the mark in commerce, even without registration. In the EU, trademarks must be registered to receive protection. The difference is significant, as the case of a 264-year-old English carpet manufacturer proves.

Founded in 1755, Axminster Carpets Ltd. of Axminster, Devon produces luxe carpets that grace the floors of Buckingham Palace, Windsor Castle and other royal addresses. The royal coat of arms and accompanying warrant – “By Appointment to Her Majesty the Queen/Carpet Manufacturer” – appear on signs, in advertisements and on its website. But the trademark and trade name “AXMINSTER CARPETS” was never registered and, through a series of unintentional and improbable events, Axminster carpets are now closely linked with JD Wetherspoon, whose hundreds of pubs offer discount beer, 8-inch pizzas, curries and Friday fish & chips throughout Britain and Ireland. The failure to register the mark has contributed to the name “Axminster Carpet” becoming more Camp than Class.

The Wetherspoon’s “Axminster” carpets, on the other hand, are distinguished by an exaggerated, ironic, sensibility — the stuff, as Sontag might note, of artifice and exaggeration – something of a private code among an urban, internet clique.

How were Axminster Carpets transformed to Spoon’s?

It began innocently enough in 2008, when Axminster Carpets entered into a contract with JD Wetherspoon to produce carpets for the pub chain. The contract lasted just two years, during which time it produced about 100 carpets for Wetherspoon. Neither the trademark, nor the distinctive, flamboyant trade dress of its carpets were registered. The rest of the “Axminsters” in JD Wetherspoons 800 other locations were subsequently made by rival companies.

For five years, no one noticed.

But in 2015, a writer and beer enthusiast, Kit Caless, started Wetherspoon’s Carpets, a blog that catalogued the floor coverings of Spoon’s pubs. The positive response to the blog was immediate and Caless’s internet fans began submitting their own pictures of local Spoon’s floor coverings, each of which was unique. A year later, the blog developed into a book, Spoons Carpets: An Appreciation published by Penguin Random House and still available from Amazon UK.

Ever since, Axminster Carpets has become known as the JD Wetherspoon type carpet, an impression reinforced with Twitter accounts (Wetherspoons Carpet of the Week, Wetherspoon Carpets), an Instagram account and a Facebook fan site. Because Axminster Ltd never registered the brand name “AXMINSTER CARPET,” it, like “Xerox” and “Thermos” before it, has devolved from a brand to a generic term for a certain style of carpet. The Merriam Webster Dictionary defines “Axminster” as “a machine-woven carpet with pile tuffs inserted mechanically in a variety of textures and patterns;” The American Heritage Dictionary as “a carpet . . . usually arranged in a complex pattern.”

As described by David Segal in his recent articles in The New York and The Irish Times:

“[t]his is hardly ideal for Axminster Carpets. Its administrative offices, which are attached to the factory, are filled with framed photographs of expensive hotels and stately mansions, each featuring what employees here like to call “an Axminster from Axminster.” There is not a pub photograph in sight.

Perhaps karma is part of the story.

In 1754, Thomas Whitty travelled to London. At Cheapside Market, he saw recently imported Turkish carpets. Spotting an opportunity, and after his own efforts to reproduce the carpets failed, he discovered Peter Parisot, a French refugee and maker of high-end carpets in London. Whitty befriended an employee in Parisot’s factory and convinced him to arrange a tour to learn the Frenchman’s secrets. Whitty promptly took the secret technique back to Devon and began making his own product.

Whitty’s Axminster carpets soon became fashionable among the English elite and wealthy furnishing country homes, including the music room of Brighton Royal Pavilion, Saltram House (pictured below), Warwick Castle and Chatsworth House. King George III and Queen Charlotte purchased Axminster carpets and also visited the factory, as did John and Abigail Adams (though neither did so under the subterfuge Whitty had employed). “The carpets are equally durable with the Turky,” wrote Mrs. Adams, “but surpass them in colours and figure.” 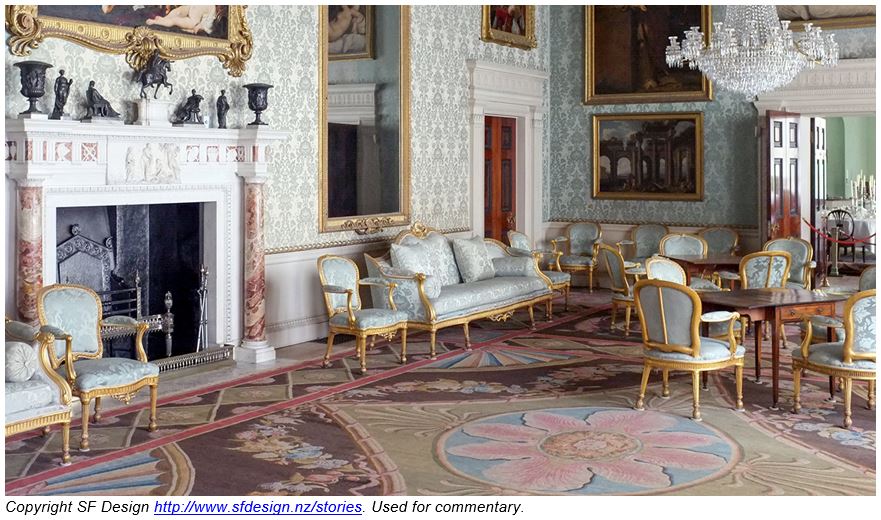 Whitty’s corporate espionage proved profitable; his carpets dominated the English market from 1755 to 1835. And across the pond, acclaim followed. The first US Senate met in Philadelphia in1790 on a specially commissioned Axminster, complete with the new country’s Great Seal, covering the floor.

Karma being what it is, in 1835, the company went bankrupt. Axminster, Devon saw no carpets made for about 100 years, although its name remained synonymous with the quality carpets made in the late eighteenth and early nineteenth centuries. The brand lay dormant until the 1930’s when an enterprising young man named Harry Dutfield, whose father was in the carpet industry in Kidderminster, happened to stumble over this fact and, with encouragement from Axminster locals, began the renaissance of Axminster Carpet.

Unfortunately, the trademark was not registered, and the designs were not copyrighted. The brand Axminster Carpet became generic to describe a type of carpet; its designs the stuff of parody.

Brand owners, particularly those with sights on an international market, need to register their marks not only in the EU but throughout the word where, unlike the United States, registration is a prerequisite to enforcement. Similarly, designers should register the copyrights in their artistic designs.

For information on how to protect your brand and designs, contact David Posteraro at drp@kjk.com or 216.736.7218, or reach out to any of our Brand Enforcement professionals.