Fake Reviews: What Can You Do and How Can We Help?

In 1961, worried that critics would savage his musical, ”Subways Are for Sleeping,” Broadway producer David Merrick turned to the phone book to find men with the same names as the daily newspaper critics, and took the critical impostors, including a mailman and a shoe salesman, to a preview and dinner, then got them to endorse the show with such praise as ”the best musical of the century.” The full-page ad trumpeting these ”raves” ran in one edition of The Herald Tribune before editors killed it.

That was then; this is now. 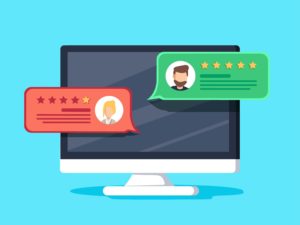 Back in the 90’s, Amazon began selling books and allowing readers to post reviews. In literature, one person’s War and Peace is another’s Fifty Shades of Grey: there’s no accounting for taste. A single negative review will not likely deter an author’s ardent admirer from purchasing the book. But as Amazon grew (and grew and grew) and as more diverse products were added to its offerings, the power of the review grew exponentially. Today, customer reviews are the norm on Amazon, eBay and most other retail sites. Consumers read reviews and make decisions based upon them, and the retail website that does not allow consumer feedback is the exception.

According to the Pew Research Center, as long ago as 2016, fully 82% of U.S. adults said they ‘at least sometimes’ read online customer ratings or reviews before purchasing items for the first time, including 40% who said they ‘always’ or ‘almost always’ did so. More recent data shows that fully 94% of customers read online reviews, and 72% of customers don’t take action until they have read reviews. This demographic increases for consumers under 50. Again, according to Pew Research, more than half (53%) of 18- to 29-year-olds and 47% of 30- to 49-year-olds say they ‘always’ or ‘almost always’ read online reviews when buying something for the first time.

How Important Is a Review?

Online reviews significantly impact the purchase process. As products begin displaying reviews, conversion rates escalate rapidly. According to the Spiegel Research Center at Northwestern University, the likelihood for a product purchase with five reviews is 270% greater than the purchase likelihood of a product with no reviews. Yet many of these reviews are fake and, according to a study from Fakespot, at least 30% of Amazon reviews alone are inauthentic and unreliable.

The spate of fake reviews — reviews written by someone who has not actually purchased or used the product or service — has increased along with the economic incentive to post a review. Individuals and companies using bots or paid third parties to write fraudulent reviews will get ‘fake-positive’ reviews to increase sales, or source negative reviews to bring down their competitors. On Amazon in particular, such reviews can dramatically improve or damage a product or seller’s ratings.

Earlier this year, the Federal Trade Commission released a statement announcing its first case challenging fake paid reviews on an independent retail website. The FTC’s complaint against Cure Encapsulations, owned by Naftula Jacobwitz, accused the weight loss brand of paying third-party websites to write dozens of fake Amazon reviews for the Garcinia Cambogia supplement. Jacobwitz was personally accused of requesting 30 reviews with a minimum of a 4.3 out of 5 star rating in exchange for $1,000. Andrew Smith, the FTC’s Director of Bureau of Consumer Protection, shared the agency’s commitment to protect consumers in a statement, saying, “When a company buys fake reviews to inflate its Amazon ratings, it hurts both shoppers and companies that play by the rules.”

Responding to criticism that its platform affords the means of dispensing fake reviews, Amazon has – for some time at least – paid lip service to the problems of fake reviews. In 2015 and 2016, it went so far as to sue more than 1,000 individuals for misleading Amazon’s customers with fake reviews of products. The cases alleged violations of various laws and acts, including the Lanham (i.e., Trademark) Act, Anti-cybersquatting Consumer Protection Act, Washington Consumer Protection Act and Washington Common Law.

In partial response to the FTC action earlier this year, Amazon announced “Project Zero,” an initiative that purports to give brand owners the ability to remove counterfeit product listings. However, Project Zero is an invitation-only program geared to stop counterfeit products and not aimed at the plague of fake reviews.

And, in response to an article in Forbes in April of this year alleging that Amazon’s problem with fake reviews was getting worse, Amazon issued this statement:

“We are able to assess review authenticity by looking at data points like reviewer, seller, or product history which websites like ReviewMeta do not have access to and therefore cannot concretely determine the authenticity of a review. ReviewMeta itself admits that they do not have the data to know, or even say with high confidence, whether a review is fake which is why they use the term ‘Unnatural’. They consider reviews to be ‘unnatural’ if the customer has only ever submitted one review or if the customer did not purchase the product on Amazon or purchased it at a discount. We have data that disproves with high confidence many of their ‘unnatural’ categorizations because we have the customer history behind each review.”

The reality is that Amazon benefits from the proliferation of sellers with real or fake reviews. Its business model is not to be the watchdog of retail but to offer the most products, at the most prices, fulfilled by the greatest number of sellers.

How to Combat Fake Reviews

The first step in combating the fake review is to determine if the fake review violates the website’s own terms of service. If it does, an immediate request to the website will often result in the removal of the offending content. Regrettably for sellers on Amazon.com, this is not an available option.

The next step is to identify the source of the review. This can be accomplished through a variety of tools and expertise involving various technical analysis and disciplines. If these fail, a subpoena to the website to obtain the IP address of the poster may be available. It is important to understand, however, that just as the maker of paper is not liable for a defamatory or libelous statement printed on it, Amazon – and, for that matter, any website to which a fake review is posted — may not be legally accountable in the United States.

Section 230 of the Communications Decency Act (CDA) of 1996 specifically provides that “No provider or user of an interactive computer service shall be treated as the publisher or speaker of any information provided by another information content provider” (47 U.S.C. § 230). In other words, online intermediaries such as Amazon that host or republish speech (i.e., fake reviews) are protected against a range of laws that might otherwise be used to hold them legally responsible for what others say.

The legal protections provided by Section 230 are unique to the U.S.; European nations, Canada, Japan and most other countries do not have similar prohibitions. Additionally, certain state specific laws may offer additional avenues for recourse.

In a few cases, copyright infringement can be used as a tool to attack the fake review in the United States. This is particularly true where the fake reviewer is using images taken from the copyright owner, or other copyrighted content. Although it has yet to be tested, there may be situations in which the protections of Section 230 of the CDA must yield to claims of contributory infringement on the part of the website posting the fake review.

Combating fake reviews requires intelligence, determination and diligence. There is no magic wand but coordinated strategies and a solid intellectual property foundation that protect a company’s brand need to be in place first, coupled with a plan for future enforcement. Working with our strategic threat data and technology partners, KJK develops effective strategies to combat the challenges posed by fake reviews and create solutions to identify the fraudsters.

For more information, contact David Posteraro at drp@kjk.com or 216.736.7218, or reach out to any of our Brand Enforcement professionals.