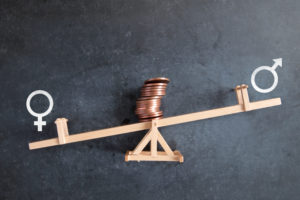 It is no secret that women make less money – on average – than their male counterparts. U.S. Census Bureau data shows that white women working full-time earned roughly 80% of what men earned in 2018. This pay disparity exists despite federal laws, such as the Equal Pay Act of 1963 and the Lilly Ledbetter Fair Pay Act of 2009, which seek to eliminate wage disparity based on sex. And while the wage gap has narrowed considerably since 1963 (when it was 59%), it has plateaued over the past decade. Equal Pay Day is the day each year on which women’s wages catch up to men’s earnings from the prior year. This year, that day is April 2, which means that women will have worked an additional calendar quarter to earn as much as their male counterparts.

On January 30, 2019, Representative Rosa DeLauro (D-CT) and Speaker of the House Nancy Pelosi (D-CA) introduced, for the 11th time, the Paycheck Fairness Act (H.R. 7) in Congress. Pay discrimination can’t be remedied if it isn’t identified, which is why the current version of the act would prohibit employers from punishing employees for sharing pay information with coworkers. It also would increase penalties for retaliation against employees that share such information. To eliminate the perpetuation of pay discrimination from job to job, employers would be prohibited from asking a job candidate about her wage history (note that this has already been outlawed in some states and cities) unless the candidate volunteers the information after an offer of employment with compensation; an employer also could verify such information with a former employer only after the candidate sought to use such information to negotiate higher compensation.

Further, under the act, an employer could not justify paying a woman less than it pays a man for equal work unless the differential was shown to be attributable to “a bona fide factor other than sex, such as education, training or experience” that is “consistent with business necessity.” The act also allows workers to sue for compensatory and punitive damages for pay discrimination (only liquidated damages and back pay awards are allowed under the Equal Pay Act) and expressly permits class actions to challenge an employer’s company-wide pay discrimination in conformity with the Federal Rules of Civil Procedure. It also requires the Equal Employment Opportunity Commission and the Department of Labor to collect certain compensation and other data from employers.

The Paycheck Fairness Act passed the House of Representatives last week by a 242-187 vote. With a Republican-controlled Senate, the passage of the legislation in that house will be a challenge. But the bill’s swift passage in the House, combined with the current #MeToo era and increased female representation and influence in Congress generally, suggests that the bill may stand a chance this time around. If enacted, H.R. 7 would require employers to comply with new reporting obligations and adjust any non-compliant policies and practices in hiring and personnel management. And while some companies oppose the legislation, citing increased costs and unwarranted government interference with their businesses, many large employers, including Facebook, Amazon and Progressive, are voluntarily adopting what they view as “best practices,” like eliminating requests for compensation history from job candidates. All businesses should examine these legislative efforts and growing trends and determine whether adopting similar policies would decrease pay discrimination, increase employee satisfaction and, ultimately, grow their bottom line.