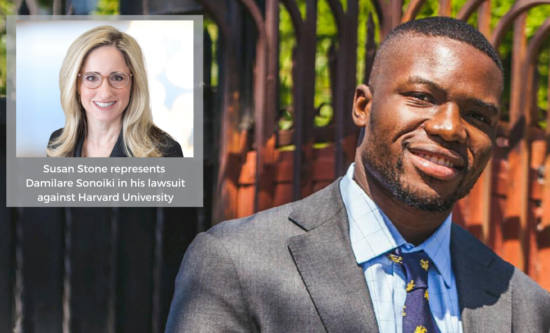 Former Harvard undergraduate Damilare Sonoiki ’13 filed a lawsuit against the University Oct. 21 alleging that the College unfairly withheld and ultimately denied him his degree after three fellow students accused him of sexual assault.

Sonoiki was set to graduate in May 2013. Two days before Commencement, however, two women formally filed formal sexual misconduct complaints against him.

Sonoiki still spoke as the Harvard Orator on Class Day and walked at graduation. Still, he was denied a degree because he was involved in a pending investigation. Several days later, the third woman filed an additional complaint against Sonoiki.

On Nov. 19, 2013, the Administrative Board found Sonoki responsible for the accusations, required him to withdraw from the College, and recommended his dismissal to the Faculty Council, according to his legal complaint. On Dec. 10, 2014, the Council dismissed Sonoki. He never received his undergraduate degree.

Sonoiki contends that the Ad Board and Faculty Council decisions were “void” because Harvard no longer had any jurisdiction over him after his scheduled graduation date.

College spokesperson Rachael Dane wrote in an emailed statement that while Harvard does not comment on pending litigation nor discuss the details of individual students’ circumstances, it is the College’s longstanding policy that a student cannot graduate if they are involved in a pending disciplinary matter.

“Harvard College is deeply committed to providing a supportive and inclusive environment for members of our community and will not tolerate sexual misconduct including rape and other forms of sexual assault,” Dane wrote.

Sonoiki’s complaint further alleges that the Ad Board process was “opaque,” “convoluted,” and “devoid of basic fairness.” Among other grievances, he claims that Harvard denied him “adequate notice” of the charges against him, the opportunity to be advised by an attorney of his choosing, and the right to question or confront witnesses against him.

In the legal filings, Sonoiki requests $300,000 for damages and a reversal of the Ad Board’s decision. He also requests the conference of his College degree.

Susan C. Stone, one of Sonoiki’s lawyers, added in an interview that the Ad Board denied Sonoiki permission to be present during the adjudication proceedings and that his Ad Board-appointed representative — his resident dean — was unable to serve as a confidential resource.

Board representatives have access to their student’s case information, may attend interviews with them, and provide general advice and support. They do not “advocate” for the student they’re representing, but rather act as a liaison and ensure the student’s perspective is “clearly presented,” according to the Ad Board’s website.

Lawyers may not serve as students’ personal advisers and cannot participate in formal proceedings, however, students may seek legal counsel before making any written or oral statements to the College and consult with an attorney anytime throughout the process.

Stone contends that these policies and the process by which Sonoiki’s case was handled were unfair.

“Today, by all standards, this does not pass the muster of fairness,” Stone said.

When Sonoiki was a student, the Ad Board oversaw both the investigation and decision-making processes associated with sexual misconduct complaints. Today, Harvard maintains both a University Title IX Office to provide education and resources on Harvard’s gender and sex-based misconduct policies, and the Office for Dispute Resolution to adjudicate formal complaints.

The Ad Board, however, remains responsible for taking disciplinary action based on the outcome of ODR investigations.

In his legal complaint, Sonoiki accuses Harvard of utilizing an adjudicatory process “riddled” with implicit and explicit racial bias. During the 2012-2013 academic year, none of the Ad Board’s 30 members were black men, according to the filing.

The complaint alleges that the lack of black male members “compromised” the board’s ability to prevent racial bias or have a representative voice on the panel.

Sonoiki described experiencing “mental turmoil” and “shame” in the aftermath of the accusations and Harvard’s decision to dismiss him from the College and deny him his degree.

“It puts you in a place of, I want to say, desperation,” he said in an interview earlier this week.

The court documents describe Sonoiki — a Nigerian immigrant — as a “rising star” and a “pillar of the Harvard community.” During his time at the College, he served as the president of the Harvard Black Men’s Forum and wrote for The Crimson and the Harvard Lampoon.

Sonoiki also wrote in his complaint that, in May 2013, Harvard Business School accepted him into its deferred admissions MBA program, but was ultimately precluded from attending because he did not have an undergraduate degree.

After college, Sonoiki worked as a junior analyst at Goldman Sachs for several years until 2015, when he began writing for the television shows “The Simpsons” and “Black-ish.”

In 2018, Sonoiki pleaded guilty to charges of insider trading for giving NFL football player Mychal Kendricks illegal tips about upcoming mergers between Goldman Sachs clients while he was employed there.

Stone said she anticipates Sonoiki will face a “smear campaign” because of his insider trading conviction, but that this past case does not invalidate his claims in the current lawsuit.

“It’s easy to say that Damilare doesn’t deserve justice in light of the situation that he was involved in with the insider trading,” Stone said. “But he made a mistake, he took responsibility for that mistake. That has no bearing on Harvard taking responsibility for the mistakes that they made in denying him a fair process.”

—Staff Writer Juliet E. Isselbacher can be reached at juliet.isselbacher@thecrimson.com.