Good authors too who once knew better words
Now only use four-letter words
Writing prose.
Anything goes.
Cole Porter, 1934

It seems quaint in light of the current political discourse that one arm of the government still enforces a strict prohibition on “scandalous” matter. Words that in a gentler time would have had the speaker’s mouth punched (or if younger, washed out with soap) are now headlines (or more currently tweets) and excused as locker-room banter. At the same time, the apologists for those speakers decry the tyranny of political correctness that requires “trigger warnings” for university subjects that might give offense. Into this mix come an Asian American rock band and an NFL franchise whose trademark complaints allege the same constitutional violations but which on closer inspection couldn’t be further apart.

Section 1052 of Title 15 of the United States Code (Section 2(a) of the Lanham Act) prohibits registration of any trademark that “[c]onsists of or comprises immoral, deceptive, or scandalous matter; or matter which may disparage or falsely suggest a connection with persons, living or dead, institutions, beliefs, or national symbols, or bring them into contempt, or disrepute . . . ”.  This “disparagement clause” has been invoked by the Trademark Office to deny registration for marks such as CHRISTIAN PROSTITUTE, AMISHHOMO, KHORAN for wine, HAVE YOU HEARD THAT SATAN IS A REPUBLICAN?, RIDE HARD RETARD, ABORT THE REPUBLICANS, HEEB, MARRIAGE IS FOR FAGS, DEMOCRATS SHOULDN’T BREED, and REPUBLICANS SHOULDN’T BREED.

In 2014 the Trademark Office invoked the disparagement clause to cancel Pro-Football, Inc.  d/b/a the Washington Redskins’ six REDSKINS trademark registrations because they were disparaging to Native Americans.  The Office similarly had earlier refused registration of the trademark THE SLANTS for an Asian American rock band on the ground that it was disparaging of Asian Americans. THE SLANTS case is now headed to the Supreme Court.

Last December, the Federal Circuit, sitting en banc, vacated the Trademark Trial and Appeal Board’s decision upholding the refusal of registration for the mark THE SLANTS and ruled that the disparagement proscription of Section 2(a) was unconstitutional on its face (In re Tam, 808 F.3d 1321). The petition for certiorari filed by the government in Tam asked the High Court to decide one question: “[w]hether the disparagement provision in 15 U.S.C. 1052(a) is facially invalid under the Free Speech Clause of the First Amendment.”

In the Pro-Football case, the Trademark Trial and Appeal Board, in a precedential decision, granted a request by Native American petitioners to cancel six existing trademark registrations that were issued between 1967 and 1990 (Blackhorse v. Pro-Football, Inc. (TTAB 2014)). Last July, the federal district court in Alexandria, Virginia affirmed the TTAB’s decision and ordered cancellation of the REDSKINS marks. Pro-Football v. Blackhorse, (E.D. Va. 2015). The appeal of that decision is currently pending and awaiting oral argument in the U.S. Court of Appeals in Richmond (Pro-Football, Inc. v. Blackhorse, No. 15-1874). In its petition to the Supreme Court, Pro-Football said that it believes that Tam was correctly decided and does not warrant the Supreme Court’s review. Pro-Football asked the Court to defer consideration of the constitutionality of Section 2(a)’s disparagement clause after the Fourth Circuit issues its decision in Pro-Football’s case. “But,” it asked, “if this Court nonetheless grants review in Tam, the Court also should grant this petition to consider this case as an essential and invaluable complement to Tam.” The Court declined.

Instead, on September 28th, the Court granted the petition filed by the U.S. government on behalf of USPTO Director Michelle K. Lee requesting review of the Federal Circuit decision in Tam only which petition had asked “whether the disparagement provision in 15 U.S.C. §1052(a) is facially invalid under the Free Speech Clause of the First Amendment.”

While THE SLANTS and REDSKINS cases may seem alike, the rock band goes to great lengths on its website to distance itself from Pro Football and the numerous headlines such as these about an “alliance” between the band and the NFL franchise: 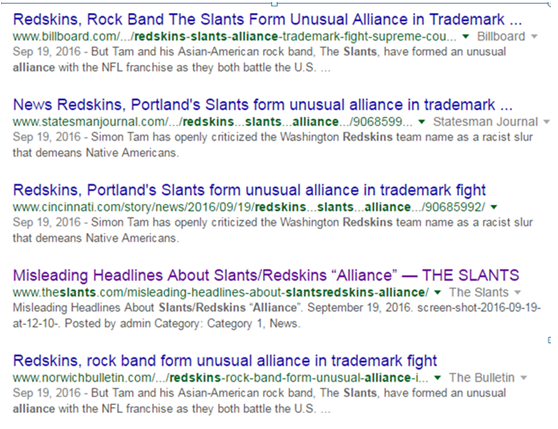 Writing on The Slants’ website, bass player Siman Tam writes “Let us be absolutely clear: we have not formed an alliance. That is false”. He continues:

While I have argued that free speech shouldn’t be restricted – and in this instance that allows some similar positions with the football team – this does not mean our band is in support of the Redskins. As I’ve written for Huffington Post: “The Change the Name campaign is much bigger than a trademark. It is possible to support free speech while opposing hate speech. It is possible to highlight injustices that communities have faced without relying on the cancellation of a trademark to do so. And it is definitely possible to frame questions about free speech around the marginalized groups who need it the most instead of writing laws around one football team, one flag, or one political candidate…

True equity isn’t achieved by sweeping government actions that negatively affect some communities more than others. The restriction of speech hurts marginalized communities. We should not discourage people from using wit, irony, or reappropriation to disarm the malicious. There should be a more culturally competent approach to avoid undermining the work of activists, artists, nonprofit groups, or businesses who use reappropriation to encourage, empower, and to educate.

The debate on free speech has almost always focused on those who abuse it. The cost of free speech sometimes means having disagreeable speech. We can’t have free speech and be free of speech we disagree with. But the price that is paid for censorship of it is carried on the backs of the underprivileged.

Meanwhile, what does this bode for the home team?