KJK
January 18, 2016
Putting valuable tax dollars back into the pockets of U.S. businesses for job creation and growth.
Re-printed with permission by author: Craig Miller, CPA, CGFM, MBA, Duffy+Duffy Cost Segregation Services, Inc.
Long-Term Certainty through the Tax Extenders Bill: The U.S. House and Senate waited until just two weeks left in the calendar year [2015] to pass “The Protecting Americans from Tax Hikes Act of 2015”.  The new law makes some temporary tax provisions important to commercial real estate a permanent fixture of tax law. Overall, the $622 billion dollar package of tax breaks extends 52 tax provisions for business and individuals, and also makes 22 provisions permanent, including the very business-friendly bonus depreciation, 15-year leasehold improvements, the research and development tax credit, the deduction of state and local sales taxes, and the $500,000 Sec. 179 expense limit.
These victories, coupled with what did not happen in Congress – such as a carried interest tax increase or the elimination of Section 1031 like-kind exchanges –provide the commercial real estate industry with remarkable certainty going into the new year. This tax legislation is a major victory for the commercial real estate industry.
These powerful incentive programs help businesses grow and successfully compete both in the U.S. and abroad. Business-friendly provisions such as the extension of Bonus Depreciation, the Sec. 179 expense election, and the Section 179D tax deduction for energy-efficient commercial buildings will be a massive help to companies across the nation. Extremely important among these is the permanent provision for 15-year qualified leasehold improvement depreciation. In addition, we have achieved longer-term extensions (five years) and a $3.5 billion allocation for New Markets Tax Credits. Many of our local businesses will also benefit by the act delaying the medical device tax.
Long-Term Financing: Using Depreciation as a Tax Shield – Depreciation is used by most businesses. An extremely important source of funds is cash flow added back from depreciation.  We frequently refer to depreciation as “a source of cash flow”. Proponents of bonus and accelerated depreciation argue that it is an important incentive to spur business investment and keep effective marginal tax rates on capital investment low.
According to BEA.gov, on average, during the last 20 years, businesses raised about 40 % of their funds internally through retained earnings and depreciation. Since 1982, depreciation has provided 77 % of those internal funds. 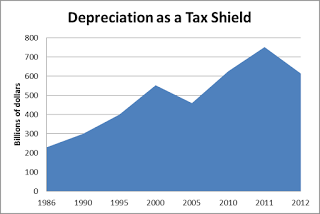 Bonus Depreciation: Accelerated and bonus Deprecation allows assets to be depreciated faster than their economic life. Accelerated depreciation and bonus depreciation is the largest corporate tax break, allowing companies to deduct the costs of assets faster than their value actually declines. The preference is the largest in the corporate tax code and is broadly enjoyed by most businesses.  Bonus Depreciation is extended through 2019. Businesses of all sizes will be able to depreciate 50 % of the cost of constructed personal property in commercial properties, in land improvements, and for equipment acquired and put in service during 2015, 2016 and 2017. Bonus depreciation will phase down to 40 % in 2018 and 30 % in 2019.
Section 179: The bill permanently extends small business expensing limitations and phase-out amounts, and makes permanent the rules allowing for certain qualified leasehold improvements to be eligible for expensing.  It increases the expensing limit to $500,000. Businesses exceeding a total of $2 million of purchases in qualifying equipment will have the Section 179 deduction phase-out dollar-for-dollar and completely eliminated above $2.5 million. Additionally, the Section 179 cap will be indexed to inflation in $10,000 increments in future years.
New R&D Tax Credit Eligibility: The new law will foster innovation and is expected to boost investment by incentivizing the development of cutting-edge technology with a permanent extension of both the Research and Development (R&D) Tax Credit. In addition to the permanent extension, for the first time businesses with less than $50 million in gross receipts will now be able to claim the credit against their Alternative Minimum Tax (AMT), thereby removing the single greatest barrier preventing companies from claiming the credit in the past. Secondly, the bill includes a provision that opens the credit up for start-ups, allowing businesses with gross receipts of less than $5 million a year to take the credit against their payroll taxes (capped at up to$250,000 per year) for up to five years.
Craig Miller is president of Duffy and Duffy, Cost Segregation Services, Inc. Duffy + Duffy is one of the leading Cost Segregation firms in the industry – performing studies based on case law and IRS guidance using CPA’s, and construction engineers and estimators. Cost Segregation allows commercial building owners to generate cash flow by accelerating depreciation deductions on their buildings and deferring taxes. For more information, contact Craig Miller, CPA, CGFM, MBA at 440-892-3339, or visit CostSegExperts.com
Information for this article was sourced through BEA.gov and Committee for a responsible Federal Budget