California Mandates Gender Diversity For Boards – Will Other States Follow? 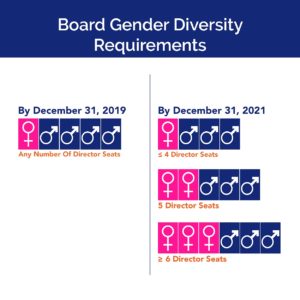 On September 30, 2018, California became the first state to mandate corporate board gender diversity by requiring public companies to include minimum numbers of women on their boards with the signing of Senate Bill No. 826.  The law requires that, by December 31, 2019, corporations with shares listed on a major U.S. stock exchange and a principal executive office in California (as reflected on the company’s Form 10-K filed with the Securities & Exchange Commission) – whether the company is incorporated in California or is incorporated elsewhere and qualified to do business in California – must have at least one woman on its board.  And by December 31, 2021, the requirements become: one woman director, if the board has four or fewer directors; two women directors, if the board has five directors; and three women directors, if the board has six or more directors.

The lengthy legislative findings prefacing the bill’s operative language state that the bill is intended to “boost the California economy, improve opportunities for women in the workplace, and protect California taxpayers, shareholders, and retirees, including retired California state employees and teachers whose pensions are managed by CalPERS and CalSTRS.”  The findings cite several independent studies linking public company boards with female representation with better performance.  They also note that Germany, France, Spain, Iceland and the Netherlands have instituted gender quotas requiring that 30% and 40% of board seats be held by women.

Fines under the law are $100,000 for the first violation and $300,000 for each subsequent violation. Additional empty seats for female board members, even for a portion of the calendar year, incur a separate violation.   In addition, the law contemplates future regulations that may require corporations to file board member information with the Secretary of State, with a failure to do so being subject to a $100,000 fine.  The California Secretary of State also must shine a spotlight on companies that need to comply with the law by publishing how many companies have principal executive offices in California, and at least one female director, by July 1, 2019.  By March 1, 2020, and each year thereafter, the Secretary of State must publish data about (1) the number of public companies that complied with the statute’s requirements at least once during the prior calendar year, (2) the migration of public companies into and out of the state during the preceding calendar year, and (3) the number of public companies that were subject to SB 826’s requirements during the preceding year but ceased to be publicly traded.

Will the Mandate Be Challenged?

While the statute is intended to help women achieve gender parity, an objective that most agree is desirable (and many would say is overdue), these particular means (SB 826) to this end ultimately may not withstand blow-back.  Many organizations, including the California Chamber of Commerce, opposed the law before its passage.  The constitutionality of the law as enacted also is likely to be challenged on equal protection grounds, due to its creation of an express gender classification and quota system.  It also could be challenged on the basis that it violates the Commerce Clause of the United States Constitution by attempting to regulate companies chartered out-of-state.  Some argue that the right tool to compel gender equality is not legislation at all, and that we should leave it to investors to require the companies they invest in to diversify their boards through shareholder activism.

Regardless, the fact remains that, in the absence of concerted action, the serious under representation of women on boards is likely to continue for many more decades to come.