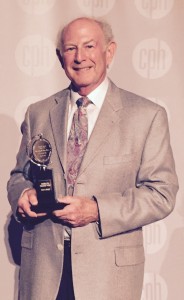 Ten years ago, when KJK Partner Alan Rauss was serving as Chairman of the Board of Cleveland Play House, which is the first professional regional theatre to be established in America, he led a strategic planning process designed to restore CPH to prominence in the regional theatre world.  The plan identified, as its highest aspiration, earning a Regional Theater Tony Award.  On June 7, 2015, CPH achieved that goal, and was awarded the “Tony” that Alan is holding in the attached picture!

“I am so proud to be one of the many men and women who have worked so hard for so many years, as professionals and as volunteers, to contribute to Cleveland Play House being recognized once again as America’s premier regional theatre,” Alan said.  CPH was founded in 1915 and is about to begin the celebration of its centennial year.  Throughout its rich history, CPH has remained dedicated to its mission to inspire, stimulate and entertain diverse audiences in Northeast Ohio by producing plays and theatre education programs of the highest professional standards.  Alan has been a member of the Board of CPH for more than twenty years, served as Chairman of the Board for three years, and continues to provide leadership and volunteer service to the organization.

Cleveland Play House is a producing theatre.  It selects the plays to be presented, hires the directors, set, lighting and costume designers, casts each show on the basis of auditions (usually held in New York, Chicago and Cleveland), and presents a diverse season which includes a mix of theatre classics and other dramas, comedies and new work.  For more information, go to www.clevelandplayhouse.org.